Every time we enter a book megastore looking for a gift, or just checking out new publications we have to avert our eyes from the pile of ugliness that attacks from every shelf. Of course, there are examples of good design but the amount of bad ones is terrifying. It’s often bland bad but sometimes it reaches the level of epically, hilariously bad – and this is our newest preoccupation: we’ve decided to publish a series of posts on the ugliest finds in the local bookstore.

Today one of the genres that invite the most kitsch, namely fantasy books. This is not a highbrow critique entitled “We wouldn’t touch a fantasy book with a pole and also they’re ugly.” This is more of “When we read fantasy in public places we hate that we have to hide the cover.” We’ve discovered that bad fantasy art falls into a couple of categories and follows a couple of graphic clichés. (When possible we show English language versions of the books for clarity.) 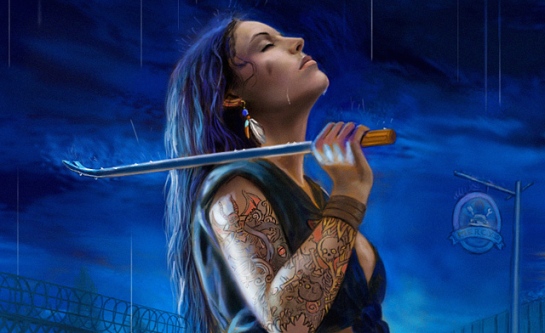 Maybe it’s gamers’ aberration, but when we think of bad fantasy art we think of women of impossible and questionable standards of beauty: with cleavage ever so deep, hair ever so shiny and muscles ever so hard. It’s only one type of sinful cover art for fantasy books but a prominent one.

These books by Patricia Briggs on, apparently, biker werewolf sluts satisfied our expectations because while colors and compositions are passable and typography, while clumsy, not nerve-wrenchingly awful, drawings are unforgettable. Shiny women combine porn-star quality and boobs which would give Dungeons & Dragons illustrators run for their money, with strangely retarded faces. Maybe it’s a smart social commentary on the plight of women who have to work in car repair shops. But somehow we think not.

Sorry for the bad pun but on these bad, bad covers for Ilona Andrews’ series magic sucks, anatomy suffers and Aslan proves a sellout. Also compositions resemble really bad collages, swords shine like in Photoshop tutorials 101 and we could go on but we mercifully won’t. Magic speaks for itself. (Also, I’ve only just noticed these titles rhyme but it’s probably accidental like everything here seems to be.) 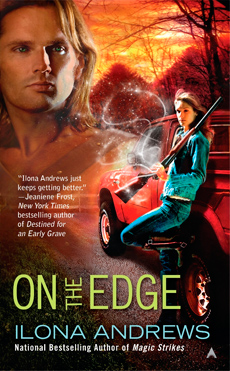 In another one by Ilona Andrews the magic rifle reminds a little of the biker series. However, what really makes this cover such a success is the gigantic floating head (and ghostly half a torso) of a man as if taken from an 80s band for teenagers with his blonde hair, pouty little lips and dead stare. 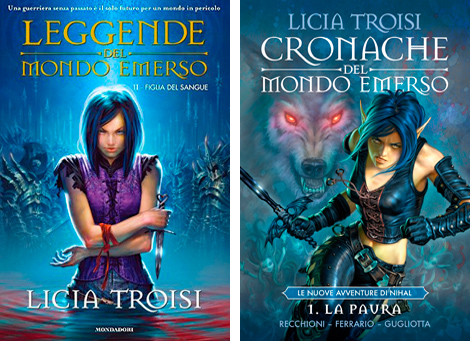 The books by Licia Troisi look extremely kitschy but less disgusting than most of other exhibits: maybe because of the color, they remind a guilty pleasure more than a guilty chore and look like something you just want to try even if it will probably make your teeth hurt. Also, it’s clearly for teenage girls and isn’t their taste all wacky anyway.

Moving into more romantic areas, we present Jacqueline Carey and her Kushiel series. Whatever Kushiel is, it has something to do with this forever topless lady with the kind of tattoo that takes a really good plastic surgeon to remove but you’re paying because it’s just so embarrassing. Or actually maybe it’s a whole order of badly tattooed women because they have various degrees of anatomic disorders, not just one kind.

Series by Anne Bishop dominated a whole shelf so we couldn’t miss the old-German-porn-like lady (the word lady used most broadly here) with the web behind. In some ways it typifies what we think of as a fantasy book cover. And then there are other in the series, with their bad Photoshop filters, twisted anatomy and over-the-top harlequin feel. Extra kitsch points for the hottie in a ruffled shirt with a shining elbow.

As already illustrated, large, aggressive animals tend to ornate fantasy covers and become the main motif on some of them. 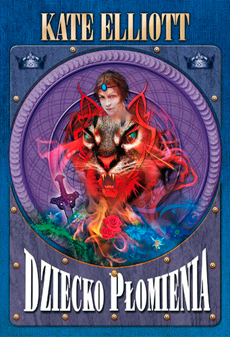 Three versions of Erikson’s book about apparently the Hound of Baskervilles with rabies involve, between them, all the clichés we’ve come up with. At the same time, they remain inspiringly different, even if all the illustrators used the same Google search image to work from.

These S. A. Swann’s covers couldn’t be more different (even in the order of initials). (Yeah, okay, they could if one was good.) We originally thought to include the first version for the hermaphroditic quality of the person, looking like David Bowie gone Tarzan. The toned down colors almost drove as away from this idea until we found the English version online. Now this one has much to love: the amateurish 3D lettering (which, by the way, seems a must in a fantasy cover), superheavy shadows under every single letter but, best of all, all these photographs fading in and out into one another. It’s like a really boring, really badly executed dream.

Naomi Novik’s two versions are interesting in how wasteful it seems to have paid two people for doing essentially the same job. Sure, Polish snakes lost their glamor along with their wings and can’t twine so intricately but instead the desert is yellower (is this a Photoshop texture or does it only look it?), the ball-thing bigger and the drop shadow instantly visible.

That’s not all: we’ve got two more exciting categories so be sure to check back. Until then we apologize in advance for all the nightmares we might have caused.